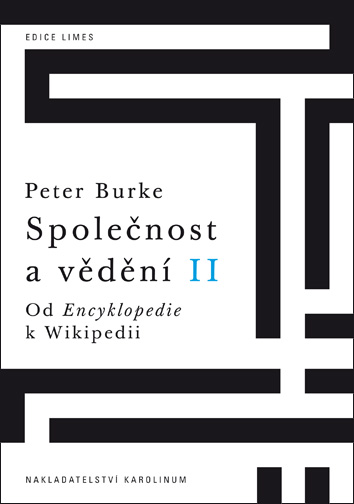 [A Social History of Knowledge II. From Encyclopaedia to Wikipedia]

Peter Burke, professor emeritus of the history of culture at Cambridge University, continues his first work of synoptic contemplations on the relations between society and knowledge. Both volumes provide a complex overview of the development of knowledge and educational practices, institutions and trends "from Gutenberg to Google”; the first volume covers the period ending with the year 1750 and the Enlightenment Encyclopaedia.
The period covered in this volume is characterized by the strengthening of central governments and the phenomenon of modern totalitarianism, and an expansion of technologies for making observations and recordings as well as means of continental and intercontinental transport, the increasing supremacy of natural sciences and the rise of huge collective projects. All of this was reflected in the sphere of knowledge or learning, bringing the tendencies whose historical background can be often found in the distant past to a new qualitative level, which led not only to progress but also to a clash of opposing tendencies and to a loss of knowledge. In his exposition, Burke covers the contrast of specialization and democratization, nationalism and internationalism, proprietary rights and general accessibility of useful knowledge and pure cognition. Similarly important is the contrast of the centre and periphery, whether the centre is represented by academia, natural sciences, modern metropolises or European West.