The appearance, character, and life of Prague, since the birth of the city, has been shaped by the River Vltava. The river enabled the se...

The design of Prague’s gardens and parks, including those that belong to palace, castle and monastery complexes, private and public alike... 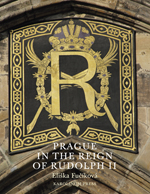 Prague in the Reign of Rudolph II takes readers back to the days of the Habsburg Emperor Rudolph II (1576–1611) when Prague became the me...

At the turn of the 20th century, Prague underwent a fundamental transformation: once again, it became a prestigious centre for the life o...