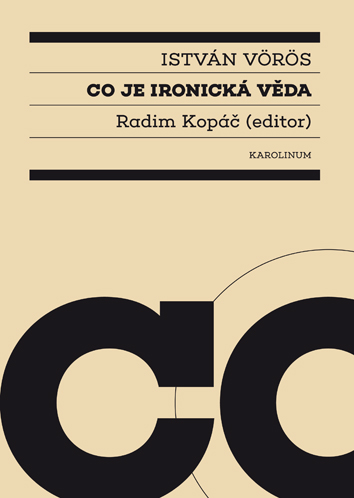 [What is ironical science]

István Vörös, a Hungarian Czech scholar, literary scientist, aesthetician and university professor, is primarily a poet, although his fiction and plays are also appreciated both at home and abroad. As a poet, he is imaginative, playful and unconventional. He also naturally employs all of these qualities in his scholarly reflections, which he calls mental experiments oscillating between studies and essays. They exhibit permanent self-reflection, being a running commentary on his own processes and performance. Vörös is quite justly considered to be a post-modernist, with auto-hermeneutics being one of the basic features of this phenomenon. Similarly to a re-interpretation of traditional stories or ideological patterns (...) (he works) with deconstruction, or better yet with constructive destruction and a fascination with traditionally contradictory notions, corresponding to the ontological contradiction between sensory perception and understanding, or between its variants (for instance, written and spoken language, sanity and madness, literal and metaphorical meaning, masculine and feminine gender).
(From Lubomír Machala’s preface)