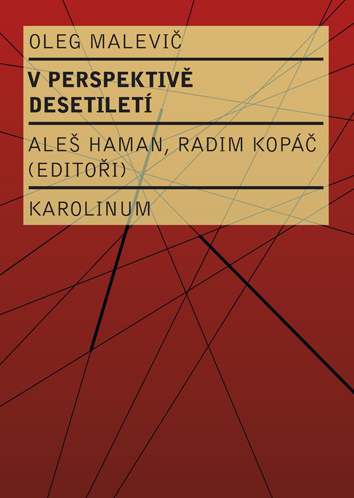 Over the Decades, written by Oleg Malevič (1928–2013), a Russian scholar focusing on Czech studies, presents thirty essays written in the period from the 1960s to the scholar’s death. The selection was made by the scholar himself, who also divided the book into a theoretical and a historical part. Malevič focuses mainly on 20th-century Czech literature (Hašek, Čapek, Vančura, Poláček, Jesenská, Hrabal and Vaculík), venturing however also to other media (the Čapek Brothers and Film), to Russian literature (Březina and Russian symbolism) and older Czech literature (the Čapek Brothers and Comenius). Malevič was also a prolific translator (translation related issues are the theme of the first theoretical essay), he wrote poetry and published two books in Czech: Bratři Čapkové (Čapek Brothers, 1999) and Osobitost české literatury (The Distinctiveness of Czech Literature, 2009). He won many awards, including Premia Bohemica (1998) and Gratias Agit (2011). Over the Decades was prepared for publication by Radim Kopáč and Aleš Haman, the latter also wrote the book’s preface.