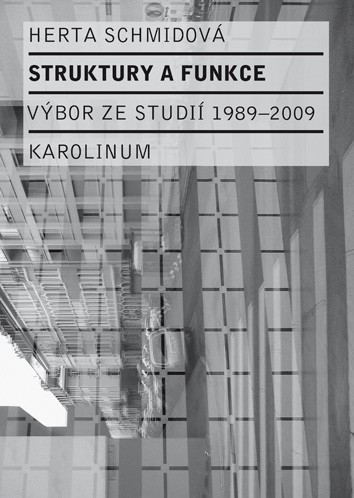 Professor Herta Schmid, until recently working at the Institute of Slavic Studies, Faculty of Arts in Potsdam, is one of the rare experts who in their scientific work paid attention not only to important figures in Czech literature in its impressive scope ranging from Renaissance up to the present day (Comenius, Jaroslav Vrchlický, Karel Čapek, Václav Havel), but also contributed to the rehabilitation of and a new view of the legacy of the Prague School of Structuralism, particularly its main representative Jan Mukařovský. Even before the views of the Czech Structuralism were fully clarified, she expressed an active interest in this method of literary research, and after the change of the regime, starting in the early 1990s she organized several meetings of German and Czech researchers in Potsdam addressing themes that inspire both parties on the theoretical as well as historical levels (such as symposia devoted to the poetics of Jaroslav Vrchlický, Mácha's work, the beginnings of the Czech Avant-garde in the 1910s, Comenius' Labyrinth). She also participated in conferences held in the Czech Republic as well as in Germany focusing on structuralism, and contributed to journals and publications devoted to Czech literature, specifically to theatre. Apart from works and publications in Slavic studies, she has also written many papers with inspirational thoughts on literary theory as well as on works by individual Czech writers. This was the impulse for publishing a selection of her works, which would offer an opportunity for Czech readers to become acquainted with the scientific character of this personality as well.
The selection is based on the scholar's views of Jan Mukařovský, a leading Czech representative of the Prague School of Structuralism, on which she further expands and contemplates in an interesting manner, as well as poetic analyses of works by prominent Czech authors, from Comenius to Karel Čapek, and last but not least analyses of poetics and semantics of Václav Havel's dramas, viewed through a structuralist approach.
(From Aleš Haman's introduction)