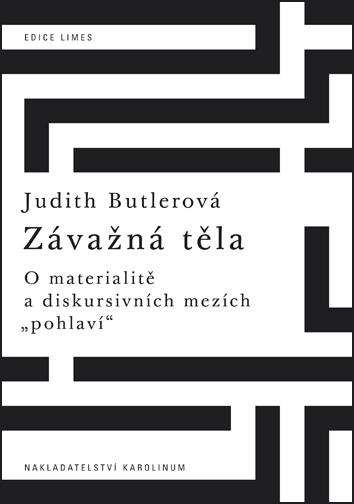 In her book, Bodies that Matter, philosopher and gender theoretician Judith Butler addresses objections raised after the publication of her book, Gender Trouble, in 1990. They primarily concern the question of corporeality as materiality, which her critics believed was insufficiently reflected in the early concept of the performative constitution of gender as Butler elaborated it. In reaction to these objections, Butler attempts to demonstrate that the question of corporeality as materiality has been conditioned by symbolic mechanisms since the very outset. Bodies that Matter, however, represents more than a merely polemic text as Butler develops her concept through a real dialogue with other feminist theorists (Luce Irigaray, Julia Kristeva), prominent philosophers of the second half of the 20th century (Michel Foucault, Louis Althusser, Jacques Derrida), and psychoanalysts (Sigmund Freud, Jacques Lacan) as well as through fiction ( (Nella Larsenová, Willa Catherová), political theory (Ernesto Laclau, Slavoj Žižek) and gay and lesbian subculture. And it is this interdisciplinary approach that makes this book one of her most important works.