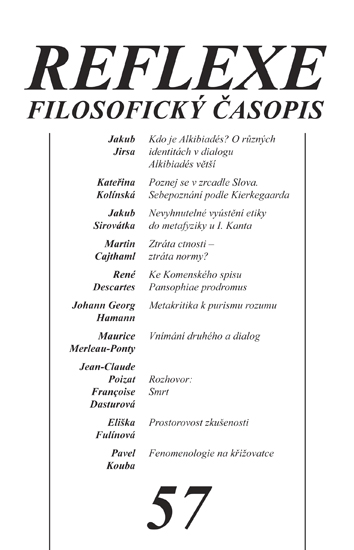 Reflexe a journal of philosophy, was founded in 1985 by Ladislav Hejdánek. The first three issues, originaly published in the underground (samizdat) form, were re-issued legally in 1990. The journal then continued as a quarterly and later, in its present form, as a bi-annual. The focus is on original studies in the areas of Philosophy and Theology. While translations of important philosophical essays are also published, preference is given to new publications. Each issue includes reviews of recent philosophical literature from the Czech Republic and abroad.

[The Loss of Virtue – the Loss of Norm? On Alasdair MacIntyre’s Understanding of Moral Norms]

The main objective of the article is to answer the question what form of ethical normativity is implied by the socially based teleology of MacIntyre’s After Virtue. The article reconstructs this normativity and provides its critique. It also takes into account author’s later development, characterized by his inclination to tomism which the author uses as a basis for metaphysical justification of norms. Regarding this point, the article critically assesses MacIntyre’s interpretation of the evaluation judgments and predicates in the later work Ethics in the Conflicts of Modernity. Regarding After Virtue, the article deals with MacIntyre’s critique of Hume’s claim that norms cannot be inferred from the facts. It also furnishes an analysis of MacIntyre’s concepts of virtue, social practice, narrative and tradition which are supposed to establish ethical normativity. Regarding the analysis of MacIntyre’s conception of value judgments and predicates in his latest work, the article explains in what sense this conception is realistic and in what sense it is relativistic. The article concludes that MacIntyre’s conception of virtue ethics in After Virtue does not provide conceptual basis for justifying the validity of norms which would be moral, universally valid and unconditional.