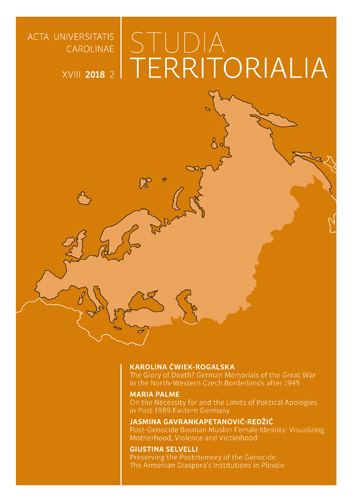 AUC Studia Territorialia (Acta Universitatis Carolinae Studia Territorialia) is a peer-reviewed academic journal focusing on Area Studies. It covers political, economic, social, and cultural affairs of North America, Europe, and post-Soviet Eurasia in the twentieth and twenty-first centuries. The journal was founded in 2001; currently, it appears biannually, both electronically and in print. It publishes original scholarly articles, book reviews, conference reports and research notes. The journal is a publication of the Institute of International Studies at Charles University’s Faculty of Social Sciences.

Since the 1990s, the making of an apology has become an instrument for promoting international and national reconciliation, replacing the exaction of vengeance upon the officials of former non-democratic regimes. This article explains when and under what circumstances an explicit apology for political wrongs has contributed to overcoming divisions in post-socialist German society. It specifically focuses on politicians and political parties that have direct links and continuity with the former oppressive regime in East Germany. What role and what impact have political apologies had on the victims to whom they are addressed and on public discourse generally? Are they part of a broader acknowledgment of past injustices under the German Democratic Republic (GDR) dictatorship? Adopting a discourse analysis approach, this paper outlines the historical and political conditions, the intentions and the outcomes of speeches of political apology in eastern Germany. It focuses on the narratives of GDR officials, Stasi informants, and members of Die Linke (The Left), a successor party to the GDR’s ruling communist Socialist Unity Party (SED), and on the responses to those narratives from the new elites, former dissidents in the GDR, and groups representing the victims of communism. The article concludes that political apologies expressed by state officials who were formerly linked with the oppressor state stimulate a dialectical process with regard to past injustices, even if they fail to achieve the desired reconciliation.