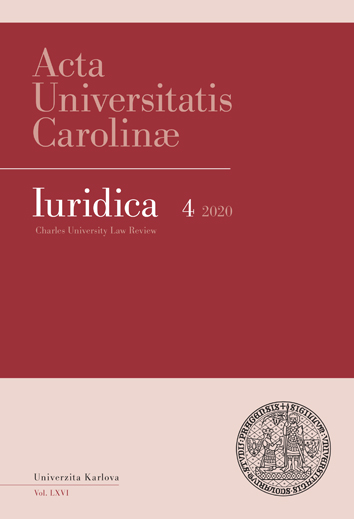 Although intended primarily for domestic audience, AUC Iuridica is useful also for foreign experts, who can take advantage of summaries in foreign languages (English, German and French) and key words, which are systematically added to the main articles and essays.

The published articles are subject to peer reviews. If necessary, reviewed texts are sent back to the author for revision.

AUC Iuridica accepts contributions from any contributor on any current legal topic.

The journal is registered in the Czech National Bibliography (kept by the National Library of the Czech Republic) and in the Index to Foreign Legal Periodicals (kept by the American Association of Law Libraries).

We are pleased to inform you that the journal Acta Universitatis Carolinae Iuridica was the first journal of the Faculty of Law of Charles University to be included in the prestigious international database SCOPUS. This Elsevier database is the largest abstract and citation database of peer-reviewed literature in the world. The editors of the journal expect from the inclusion in the elite SCOPUS database not only an increase in the readership of the journal, but also an increase in interest in the publication of papers by both Czech and foreign authors.

The article deals with the writing requirement of the arbitration clause under the New York Convention (the “Convention”). The discussion has been triggered by the recent Czech Supreme Court decision on the formal validity of an arbitration clause contained in an exchange of emails. The author first recalls the drafting history of the Convention and rationale behind the writing requirement. Then he analyses its interpretation in the practice of court before and after the 2006 UNCITRAL Recommendation, which suggested extending the interpretation to modern forms of communication such as email. The main part of the article closely scrutinizes the Czech Supreme Court’s decision on the issue. The Court followed the 2006 Recommendation and the majority of its foreign counterparts. However, it also had to deal with the question of whether an email has to be accompanied by a qualified electronic signature for the written form to be met, as this is (unfortunately) the Court’s requirement when it comes to relations governed by Czech law. Fortunately, the Court has taken an international approach looking both to foreign courts’ practice and to its own case-law under other international conventions such as the CISG or the CMR. Thus it has arrived at the conclusion that the writing requirement under the Convention is met also in the case of an arbitration agreement contained in an exchange of simple emails.

Czech perspective on validity of international arbitration clauses contained in an exchange of emails under the New York Convention is licensed under a Creative Commons Attribution 4.0 International License.