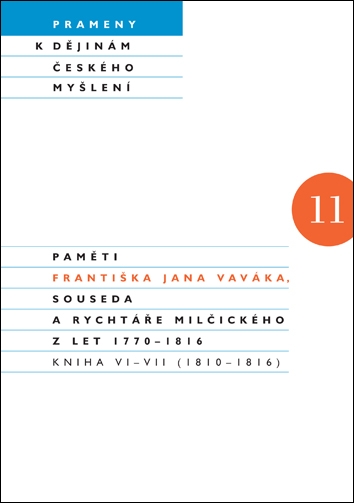 František Jan Vavák (1741-1816) was the most important of the Czech peasant amateur writers. Lacking any formal education, through self-study he achieved considerable cultural insight. This member of the first revivalist generation was a self-taught chronicler, versifier, musician, surveyor and cartographer. In his homestead in Milčice near Poděbrady, he engaged in plant and livestock production and made his own tools. From 1774, as a local mayor, he gained recognition for exercising lawfulness and religious tolerance. The pinnacle of his work is his Memoires in seven volumes - diary entries with fading popular Baroque piousness and a new high degree of national and Estates consciousness. The first five volumes of the Memoires were published in 1907-1938 by the historian of religion Father Jindřich Skopec (1873-1940), the remaining two volumes from 1810-1816 were prepared for publishing by Stanislava Jonášová-Hájková (1903-1985), a student of historian Jan Pekař, during the Protectorate times. The work, gained from her estate, was revised and completed, and complemented by an introductory essay.