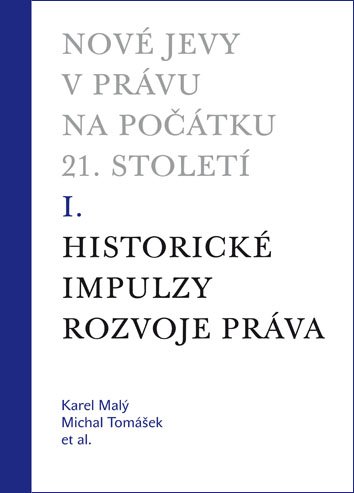 [New Phenomena in Law at the Beginning of the 21st Century ? vol. 1 ? Historical Impulses]

This first volume of a five-volume monograph on new phenomena in the law at the beginning of this century aims to show the role of historical experience in formation of new law. The team of scholars from the Legal Faculty of Charles University based the work on the question of the usefulness of legal history in the ongoing stream of transformation and formation of new law as well as questions regarding the information that legal history can provide the current legislation and legal theory, and for reflections concerning the course of the Czech and European legal order. When searching for answers, we cannot do with a mere reference to the fact that law in itself is a historical category, that changeability of law and its formation is conditioned by history, that the principle of continuity applies to law and that the effective law as part of legal culture is influenced by not only domestic but also European tradition, springing from the ancient legal thinking and canon law. Legal history offers something else: it offers a map of the historical development of legal order. As such, legal history in fact supplants social experiment and vain or risky experimenting often with a tragic outcome. Legal history can thus undoubtedly bring considerable contributions to the development of effective law and to current legislation. Analyzing historical concepts and legal theories as well as using examples of old legislation and legal practice, it can provide historically proved evidence concerning the possibility and impossibility of legal regulation of social relationships. It concerns the period before 1989 as well as the democratic legal order. The former because we are still in the stage of overcoming it, while the latter because not only legal practice, courts and the Bar but also current legislation have to go back to the 20th and sometimes even to the 19th century.