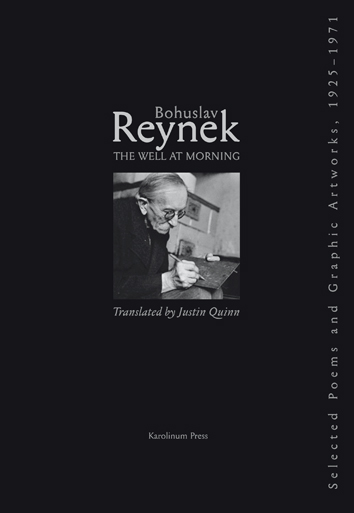 The Well at Morning

Poet and artist Bohuslav Reynek spent most of his life in the relative obskurity of the Czech-Moravian Highlands; although he suffered at the hands of the Communist regime, he cannot be numbered among the dissident poets of Eastern Europe who won acclaim for their political poetry in the second half of the twentieth century. Rather, Reynek belongs to an older pastoral devotionaltradition—a kindred spiritto the likes of Gerard Manley Hopkins, William Wordsworth, Robert Frost, and Edward Thomas. The first book of Reynek’s poetry to be published in English, The Well at Morning presents a selection of poems from across his life and is illustrated with twenty-five of his own color etchings. Also featuring three essays by leading scholars (M. C. Putna, J. Quinn, J. Šerých) that place Reynek’s life and work alongside those of his better-known peers, this book presents a noted Czech artist to the wider world, reshaping and amplifying our understanding of modern European poetry.

Dear Mr. Reynek, You cannot know how much joy your poems brought to me - how their clarity and purity helped me... I must mention the unease, the admiration, that your verses evoked in my friends. When I told them your name, and the dates when some of the poems were written, they felt shame - the guilt one feels when he has no excuse for overlooking something, for sleeping through it.
Jiří Kolář, letter 29 June 1954, in BR: Correspondence

Goats, spiders, infernal roosters; a reddening sun, emerging florets; hayricks, byres, windows, rakes; Advent, Christmas; Job and Esau; the drama of sacrifice - these are poems attentive to, sprung from, a creaturely world subtended by a metaphysical presence. In Bohuslav Reynek the reader of English encounters a twentieth century Czech poet both profoundly Catholic and utterly, subtly modern.
Translator Justin Quinn has brought Reynek - himself an estimable translator of Rimbaud, Francis Jammes, Valéry - into an English aligned with the caretaking apparent directness of Frost, of Edward Thomas; other readers may hear here something of an Englished Georg Trakl. Earlier work channeling an often anguished energy gives way to something calmer, simultaneously sparer and more expansive.
There is a simplicity here as if of old ballads, folk songs - as if. this is the simplicity of the profoundly pondered, distilled, parsed and pared. Reynek’s fly is, for example, an affine of Blake’s. From his farmstead Reynek beheld the world. There seems here to be no need for a theory of objective correlatives: everything ingathered in the poet’s work is always already allegorical, suffused, charged. Common rhythms and patterns - of season, of liturgical calendar, of sunrise and moonrise - inform the shapely forms of Reynek’s poetry, a shapeliness Quinn has brought over into English.
Reynek might be seen as a sentimentalische in Schiller’s sense, as opposed to naïve: "sentimental” in that his work has borne and transformed the burden of reflective consciousness, its working with deep and (formerly) common tropes a poetic ploughing of a simultaneously elemental and spiritual ground. In these selected poems we encounter an informed attentiveness, a sensibility alert to the signs and parables which the ordinary endlessly affords: baby goats who "usher in/the mundane in a vision,” the "varicolored golds” of ploughed fields; sudden appearance of "Star prints of Paradise.” One finds here not the effortfulness of epiphanies but the ongoing registration of a complex revelation: "So many stars in snow/and just one human track.” It is timely for Reynek to have made his track into English. His work asks for, and rewards, a deep listening.
Maureen N. McLane, author of This Blue and My Poets, Professor of English at New York University)


Interview with Justin Quinn about translation of Bohuslav Reynek’s poems

„You have translated a collection of Reynek’s poetry which is just being published in English. It includes a very interesting essay you have written about how you approached translating him, trying to make him accessible to an English-speaking readership.“

„It’s a bit like having two friends who don’t know one another. Your job is to introduce them to one another and – hopefully – to provide the atmosphere in which they can get on with each other. And that’s what I felt I was doing with Reynek. I was trying to make him echo and resonate with poets who I think are very close to him in English. I also felt very strongly committed to the idea of translating him into rhyme because he is a rhymer in Czech and it strikes me as impossible to translate somebody like that purely into prose. So much is lost at that moment. And then there’s the balance how much content to preserve and in which places you will lose some of the content. But I think translation is always a set of compromises.”

Justin Quinn’s rendering of Reynek’s poems appears effortless, but it has in fact been a labor of love for many years. The result feels more like transubstantiation than translation. The methodology of this mystery is revealed in Quinn’s essay toward the end of the book: he “tried to naturalize Reynek,” not “resisting the temptation to make him echo Frost or Edward Thomas.” In so doing, Quinn has given an authentic English voice to a rural Czech poet whose work is as fresh and revelatory today as it ever was.
Michael Tate(Los Angeles Review of Books)