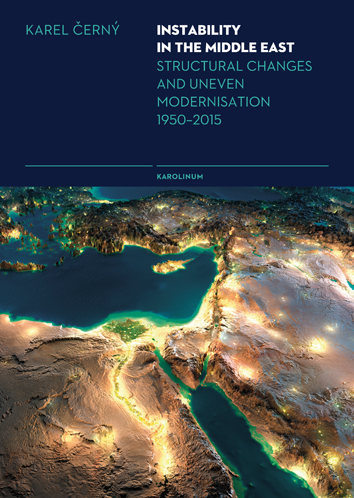 Instability in the Middle East

Middle Eastern instability is manifest externally in many ways: by crises afflicting governing regimes, the rise of political Islam, terrorism, revolution, civil war, increased migration, and the collapse of many states. This book examines the roots of this instability using a theoretically original and empirically supported historical sociological comparative analysis. Up till now interpretations of the development of the post-colonial Middle East have been dominated by two opposing theses. The first views the region as backward, unchanging and rigid, the second as undergoing excessively rapid transformation. This book offers an alternative perspective focusing on the highly uneven and unsynchronised pace of change in individual dimensions of Middle Eastern modernisation. What we are seeing is (1) rapid socio-demographic change (a sharp increase in the population and the proportion of young people, rapid urbanisation, and the expansion of the media and education), (2) slower and unstable economic change (dependency on oil exports, high unemployment), and (3) slow or regressive political change (erosion of the capacity to govern, the absence of democratisation and liberalisation). The theoretical model employed emerged from a critical reading of theories of modernisation and a concept of multiple modernities that also allows for an interrogation of the broader cultural, religious and international political context of uneven modernisation in the Middle East. This model is then tested empirically using the time series (1960–2010) of dozens of indicators covering the demographic, social, economic and political dimensions of the modernisation process.
In general the book does not concentrate on externally monitorable political actors and their rivalries, as so often is the case. Instead, it focuses on the political rivalries of deep, long-term cumulative demographic, social and economic change taking place beneath the surface. It looks at changes that are not simply taking place in individual countries of the Middle East, but since the end of the Second World War have affected the entire region and are responsible for the emergence of a Middle East completely different to that to which we were accustomed for many decades.

Political Modernisation: Weak and Authoritarian States
Frozen political modernisation in an international comparison: the democratic deficit
Regional comparison: the democratic deficit of Middle Eastern regimes
The second dimension of political modernisation: a weak state and a governance deficit
The character of Middle Eastern regimes and the character of political repertoires of contention
Political regimes and political repertoires: a weak authoritarian state, revolution and terrorism

(1) The birth of political actors: mass political participation and rigid political systems
(2) The discrepancy between preferences and reality: the desire for democracy, prosperity and conservative morals
(3) The discrediting of unscrupulous dictators, the invention of tradition and the moralising drive of Islam
(5) The current conflict as a continuation of history
(6) The decline of secular doctrines: an ideological vacuum and Islam as an alternative
(7) The chronic crisis of the legitimacy of regimes: the career of Middle Eastern ideologies
(8) The turn to religion: official Islam and the risky strategy of regimes
(9) Domesticated clerics and the decline of the traditional religious authorities
(10) Oil rent, the power pyramid and the socio-economic alienation of regimes
(11) The cultural alienation of westernised regimes: cultural decolonisation
(12) Clientelism and the alienation of the regime from the rest of the population
(13) Military clientele: co-opting of the army, polarisation of society
(14) Terrorism as the continuation of politics by other means

(1) Rebellious youth: identity crisis, intergenerational conflict and adolescence
(2) The leisure of the "Arab street": a blessing or a curse?
(3) The attitudes and aspirations of young people on the eve of revolution: the conflict between hopes and reality
(4) A lost generation: the population dynamic versus a collapsing labour market
(5) Demographic marginalisation and the marriage crisis
(6) The generational alienation of the power elite: the old cadres versus the young population
(7) The uneven population growth of different groups within a heterogeneous state

(1) The birth of public opinion: the masses discover politics
(2) The mobilisation and coordination of collective action: the case of the Arab Spring
(3) A shrinking world I: consumer aspirations and the revolution of growing expectations
(4) A shrinking world II: visible domestic inequality
(5) A shrinking world III: the Turkish model and other reference countries
(6) The shrinking Arab world: the democratising effect of Al-Jazeera and the revolutionary domino
(7) The media at the service of opposition political Islam
(8) The religious market and the erosion of traditional authorities: the struggle over how to interpret Islam
(9) Pluralism and fundamentalism

(1) Educational problems: poor quality and growing inequality as evidence of the failure of regimes
(2) The awakening of political awareness and the failing Middle Eastern panopticon
(3) The boomerang effect of religious education: the Islamic revival and a culture of interpretation
(4) Secondary school political chemistry: the reaction of disgruntled teachers and students
(5) Universities as centres of opposition
(6) The battle over the interpretation of Islam: the loss of the monopoly of traditional authorities and the arrival of new interpreters
(7) Counter-productive reactions on the part of regimes: I speak in the name of Islam - I have power
(8) The westernised mindset and the creolisation of Islam: Western ideology and the invention of tradition
(9) Growth in aspirations and the unemployed "lumpen-intelligentsia"
(10) The alienation and radicalisation of the intelligentsia

(1) Unmanageable urbanisation: discredited regimes and their doctrine of development
(2) Spatial concentration: the potential for political agitation, organisation and mobilisation
(3) Urban unemployment: voluntary simplicity instead of revolution?
(4) Shrinking of the social world: visible inequality and the resistance of socially sensitive Islam
(5) Urban and rural poverty: new reference groups, new aspirations
(6) Islamic charity and civil society: the urban middle classes and the poor as clients
(7) The crisis of the overburdened urbanised family: the conservative reaction
(8) A threatening urban environment and Islamic feminism
(9) Intergenerational alienation: the decline in the authority of rural parents and the search for surrogates
(10) Radicalisation of the second and third generation of migrants
(11) The city as the modern jahiliyyah: the epitome of moral turpitude
(12) The traditional bipolarity of urban and rural Islam: a disturbed balance
(13) Peasants into Islamists: socialising functions and surrogate rural communities
(14) From folk to political Islam: ideological functions and an orientation for the disoriented

Conclusion
Four macro-comparisons of modernisation patterns and chronic instability in the Middle East
Mechanisms of destabilisation: from macro to micro, from structures to actors

Karel Černý provides us a comprehensive investigation of the multicausal spectrum of factors of instability in the Middle Eastern region. The book puts to work the most sophisticated tools of historical sociology and offers us one of the deepest and most nuanced picture ever produced on the conundrum of desires for socio-political changes and the resilient blend of political authoritarianism and religious conservatism in the Middle East. It also includes a particularly insightful exploration of the now classic themes represented by the complex trade-off between Islamism and nationalism within the postcolonial politics of the region as well as the tensions between rulers and clerics. The work deserves the attention of students and scholars within sociology, history, and political science, as well as Middle East and Islamic Studies.
Armando Salvatore (Center for Arab and Islamic Studies, Australian National University)


The contemporary Middle East is one of the great enigmas in world politics. A large and historically important region seems to be plagued by endemic violence, regime instability, religious extremism and a long series of developments which appear to contradict the conventional assumptions about modernity and modernization. In this book, an honest, comprehensive and original set of solutions are offered to the problems inherent in the Middle Eastern enigma. The author parts ways with conventional theories which tend to be either linear (hence unidimensional) or else over-ambitious (hence chaotic and confusing). Instead, this book concentrates on asymmetries, internal contradictions and unevenness of development as the key explanatory variables for the present state of Middle East politics. Set against a vast historical background and employing a balanced multi-disciplinary approach, the book makes a major theoretical contribution, at the same time offering a rich set of incisive insights into the apparent mysteries of the Middle East today.
Gabi (Ben-Dor, Haifa University, Israel)


Based on rigorous empirical research Cerny’s account of the causes and consequences of the Arab Spring should be relevant for scholars and policy makers alike.

Kamran Matin (University of Sussex, author of Historical Sociology and World History: Uneven and Combined Development over the Longue Durée)


Thanks to its interdisciplinary approach and meticulous research, Cerny’s work is relevant both for students searching for an introductory and comparative study of the Middle East, as well as for professional scholars interested in an original and challenging work on the causes for instability in the Middle East. The comparative methodology employed, alongside the detailed research it is based on, should inspire similar ventures into other modernization processes around the world.
Adam Coman (British Journal of Middle Eastern Studies