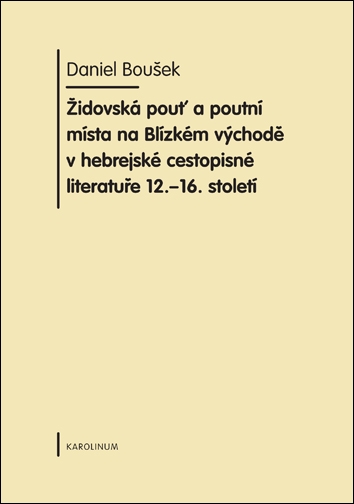 This book, based on the Hebrew travel literature from the 12th - 16th century and other Hebrew or Arabic sources, covers the development of the Jewish pilgrimage to the Holy Land and the status of the pilgrimage sites in the Middle East and mainly in the Holy Land in the religious life of the Jews in Europe and Islamic countries. Literature on the Jewish pilgrimage and lists of holy places, which appear from the mid-12th century, describe not only the traditional pilgrimage to Jerusalem, but also a new phenomenon in Judaism - visiting the graves of saints (zijara). At about this time, holy Jewish places are beginning to appear on the map of the Middle East, which grew from local holy places for local "users" into sites with strictly set calendar and pilgrimage rituals, which attracted pilgrims from wider areas. The book focuses only on the history of the most important of them: Moses' Synagogue in Dammuh, Egypt, Ezekiel's Tomb in Iraq, Elijah's Synagogue near Damascus, the tomb of Hillel and Shammai in Meron and Samuel's Tomb in Ramot. European Jewish pilgrims' travelogues reveal various aspects linked with the worship of the holy places, such as fire or smoke over the tombs phenomena or curative or protective function of the holy places, among others.