For much of their history, the Slovaks have remained largely hidden from international view, first as part of Hungary and then of Czechoslovakia. As a result, Slovak is one of Europe’s least well-known and translated literatures. Its modern literary language was established in the 1840s but was long the preserve of a small cultural elite, until the social, economic and political changes of the twentieth century transformed a largely rural society into a modern nation with its own distinctive character and voice. Karolinum’s Modern Slovak Classics, a newly launched sister series to Modern Czech Classics, recognizes the two cultures’ long-shared history and aims to fill the literary gap that exists between them in the Anglophone world by introducing readers to seminal works from late 19th and 20th century Slovak writers. English readers will get to experience the richness and variety of Slovak literature, from the realist and the satirical to the naturalist, from lyricial fiction to literary reportage and memoirs, all the way through existentialist and postmodern works.
by date by title by author 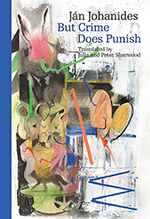 But Crime Does Punish

"So, as you see, I am familiar with the case. However, we can’t discuss it unless you learn more about some other court cases, so that yo...