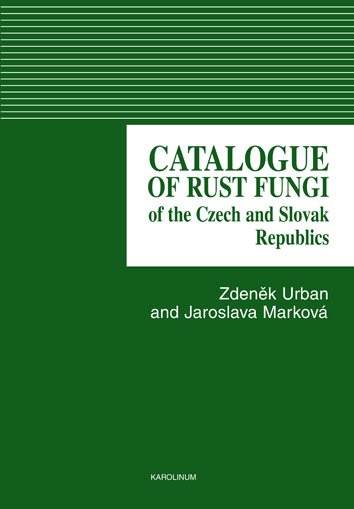 Catalogue of rust fungi of the Czech and Slovak Republics

Rusts (Uredinales, Basidiomycota) are a group of obligate biotrophic fungi pathogenic on a broad range of seed plants, and ferns. Rust fungi consist of more than 7000 species that possess some of the most complex life cycles in the Eumycota. Traditionally, a limited number of synapomorphic charac-ters and incomplete life-cycle and host-specificity data have hampered phylogenetic inference within the Uredinales. As they are almost impossible to be cultivated in vitro, they have been the subjects of far fewer molecular studies than other fungal groups of similar size, thus current contradictions, especially in the deeper nodes, have not yet been resolved.
The book "Catalogue of Rust Fungi of the Czech and Slovak Republics" represents a summary of the distribution of rust fungi in the territory of the former Czechoslovakia (the Czech Republic and the Slovak Republic). This catalogue is based mainly on materials collected by deceased professor Zdeněk Urban, who dedicated all his professional life to study of the taxonomy and ecology of rust fungi. In the list there are only included those rust whose occurrence in the various areas is supported by records published since 1906 up to now. The older records follow the rust flora of the Czech Republic (BUBÁK 1906).
In this catalogue, 376 species are enlisted and the current taxonomy and nomenclature of individual rust species is provided. The list is arranged alphabetically, when doubtful taxons lack the number, so really more than 376 species are described here.
Each of the species in the list contains authors, place and year of the valid publication, synonyms, and list of localities where its occurrence in the Czech and Slovak Republics was recorded. Data are chronologically ordered from earlier to recent acquisitions. The list of localities is completed with descriptions of some special morphological and ecological aspects (occurrence of various types of spores, months of their occurrence, persistence of spores, variability of spores, etc.). In some cases also other comments e.g. about taxonomical revisions are added.
Whole book is terminated with the list of host species (in alphabetical order) and rust species re-ferred to them. The abbreviations of the life cycle type (e.g. spermogonia, aecia, uredia, etc.) are sup-plemented. Also references and index of rust names and synonyms, where accepted and unaccepted names are differentiated, are included.
The book is excellent publication and very useful for those, who want to look up some basic infor-mation about rusts in the Czech and Slovak Republics - place and date of occurrence of particular species, or synonyms of their names, and basic information about their hosts. Thus, this book will be of significant interest to students in master and doctor degree, however, also for professionals in mycology, phytopathology and plant protection.