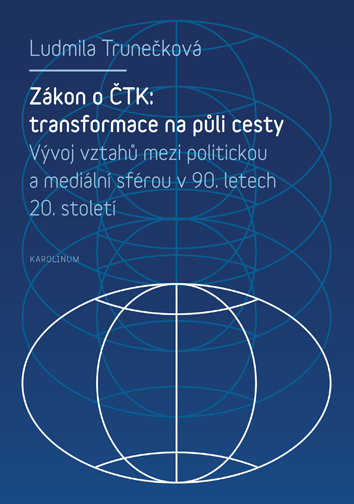 This monograph captures the development between the political and media spheres in the Czech Republic in the 1990s and the influence of the political sphere on the transformation of the Czech News Agency. The first three chapters focus on the process of the creation of institutional legislation (acts no. 123/1965 Sb., no. 310/1991 Sb. and no. 517/1992 Sb.), the subsequent two address application of legal norms, using an example of electing the first Czech News Agency Council (1993) and the government’s attempt to return the obligation to publish official statements unabridged to the law and thus to redefine the agency’s role (1995). The last part recapitulates stances on the change of the status, or potential privatization of the agency, which were related to the second CTK Council (1998), although this theme reverberated throughout the entire 1990s. In 1992, legislators expected the status of the CTK as a public service medium to be only temporary, unlike the laws on Czech Television and Czech Radio.