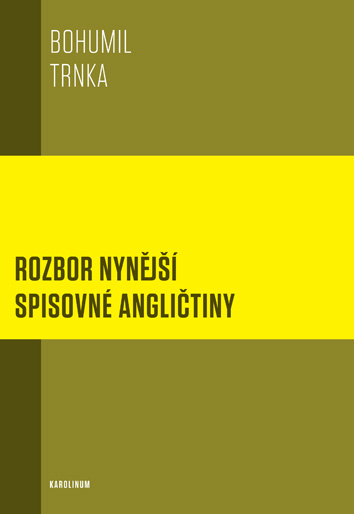 [An Analysis of Contemporary Standard English]

This edition of An Analysis of Contemporary Standard English, a fundamental text on methodology consisting of three volumes and written by a leading representative of the Prague Linguistic School, represents the text’s very first comprehensive edition in a book format. In An Analysis, the only book written by Bohumil Trnka, a student of Vilém Mathesius, the founder of the functional and structural linguistic tradition in Prague and of the Prague Linguistic Circle, the scholar presents his comprehensive concept of language as a system of four hierarchically ordered levels, describing the three lower levels: phonological, morphological and syntactic. The scholarly public has not had the opportunity to become acquainted with this fundamental linguistic treatise as it was previously only published as a textbook for students of the Faculty of Arts, Charles University (for the first time as individual volumes, in 1953, 1954 and 1956, respectively). Only Trnka’s analysis of the phonological level was previously published as a book – in English in the Czech Republic in 1935 and later in revised Japanese (1936) and American (1968) editions.