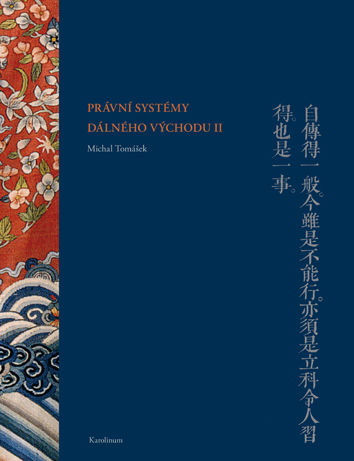 The second volume of the book by Michal Tomáš is devoted to the comparison of the current legal systems of the Far East (China, Japan, Korea, Mongolia, Vietnam) with their foreign archetypes. It shows how foreign legal concepts and institutes have been adopted in the far-eastern legal environment and how they have been applied over time. The comparison of the current judiciary interpretation of the transferred foreign laws in the various countries of the Far East combined with the interpretation of the same concepts and institutes in their countries of origin gives an answer to a number of questions, including what further direction the law in the Far East may take. It also reveals the principal theme of the two volumes, namely to what extent does the interpretation of the new law survive traditional legal thinking and even whether it doesn't continue to develop at the expense of the law adopted from abroad. Continuing in the tradition of the first volume, the book will be suitable for experts and the wider readership community alike. Numerous illustrations help to document the explanations in the book.