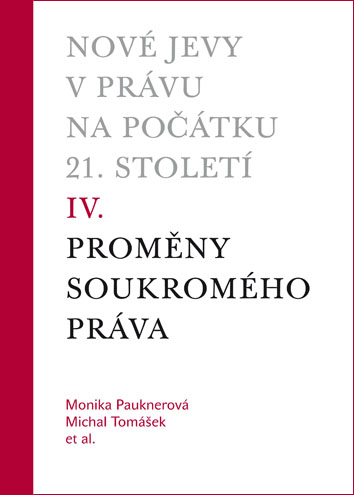 This next-to-last volume of the extensive monograph compiled by a research team of the Charles University's Faculty of Law is concerned with the causes and effects of transformations in current private law. Individual subjects of private law influence one another and in some cases - particularly in areas in which they were artificially separated during the socialist era - they converge again. New impulses in the indicated direction are brought by the prepared re-codification of the Czech private law, whose main goal is the restoration of the Civil Code as a general code. Together with the Civil Code, also a new Business Code and a new international private law are being presented. The re-codification of the Czech private law opens many questions, which are necessarily reflected in many chapters of this volume. The fundaments of the private law are considerably marked by the phenomenon called the publicization of private law, which for some time has brought elements of public law into the domain of originally purely private law. This can lead to a certain relativization of the term "private law", typically for instance in the law of business organizations. After all, procedural law as a whole, including the civil procedural law, is essentially public law. Public law is considerably reflected for instance in the area of the labor law, whose trends keep a certain autonomy in comparison with the development of private law on a general level. Private law has been undergoing a specific development even as part of European integration. The European union is, at first sight, linked mainly with public law, nevertheless also public law has lately - slowly but steadily - found it place within the European Union, primarily through the harmonization of member countries' legislation.