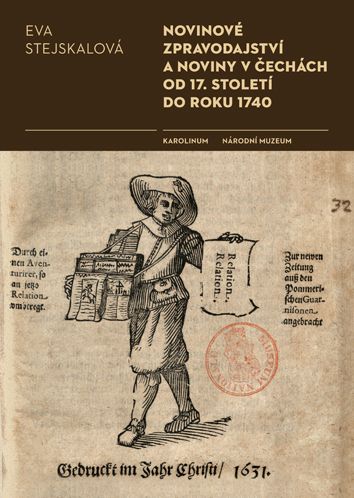 News has been spreading among people from time immemorial. Narratives, messages, letters, songs, but also written news, pictures and pamphlets were the predecessors to periodicals which soon achieved primacy thanks to regular and constant publishing of the "newest” information. The privilege to publish newspapers was granted to book printers, who cherished it and passed down to their offspring, while the news correspondence was procured by the post, which sometimes participated in newspaper publishing itself. The first printed regular newspaper originated in 1605 in Strasbourg , while the first newspaper in Bohemian Crown Lands, published in Prague’s workshop of the Sedlčanský family in German-language, appeared in mid-1658. The first issue of Czech-language newspaper was published in Prague by Karel František Rosenmüller Sr. in February 1719.
This book presents methods of disseminating information on events and happenings by the newspapers’ "predecessors,” describes many Czech and German periodicals published in Prague between 1658– 1740, primarily choosing from their content the news items and their circumstances. There is no doubt that these were often remarkable from both historical and individual perspectives.