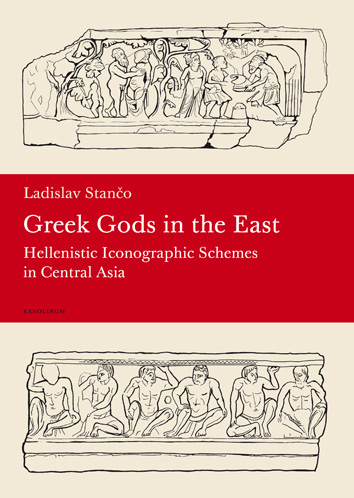 Greek Gods in the East

This book focuses on the fate of the Greek mythological themes, divine and heroic figures, far in the East, primarily in the area of ancient Gandhara and Bactria (today in Uzbekistan). In alphabetic order, it covers primary iconographic schemes, which the art of these areas borrowed from the Hellenistic Mediterranean. We can compare how individual typical depictions of Greek deities changed and accommodated the taste and ideas of the local populace over the centuries. Aside from this, many of the originally Greek mythological characters, including their typical attributes, became, as this book clearly shows, the basis for images of various local Iranian, Indian and other deities.

This book is entirely unprecedented. Though based on the same organizing principles as the LIMC (Lexicon Iconographicum Mythologiae Classicae) (alphabetical order of deities and mythological figures, subdivisions by types, systematic information on provenance, material, dimensions, conservation place when known, previous bibliography), it does not in any way overlap with it as the overwhelming majority of objects presented were not included in the LIMC. Total exhaustivity is out of the reach of any scholar, especially in such a geographical field where collections and publications are scattered and sometimes hardly accessible, but Dr. Stančo did not spare any efforts to approach it as much as possible.
Contrary to the LIMC, the illustration here has been entirely redrawn from original photographs, in order to avoid copyright problems. This was a delicate choice but, I must admit, very succesful in this case, for entrusting the work to only one illustrator (Mrs Kazakova) has resulted into full consistency in the rendering, and the drawings are both elegant and accurate. In the text part the commentaries are sober and precise, the conclusions drawn cautiously but based on sound reasoning. Even on such much-trodded paths as the question of the relative importance of the Greek and Roman factors in the Classical component of Gandhara art, Dr. Stančo has managed to clear the discussion from many dead ends that have encumbered it in the past and he provides solutions which are both clear and convincing.