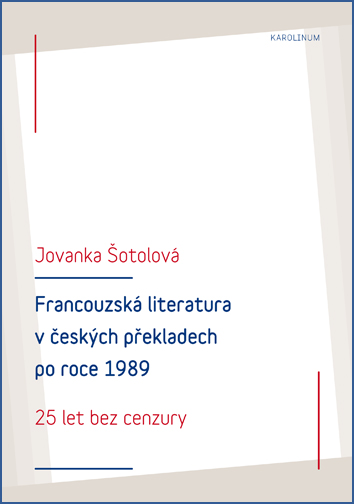 [French literature in Czech translation after 1989: 25 years without censorship]

This analysis of the bibliographical corpus of French fiction published in the Czech translation between 1989–2013 demonstrates known facts, but also presents interesting details. It strives to answer the following questions: What do we know about French literature? What do we appreciate about it most? Can we read all of the most important books by French authors in Czech? It seems that Czech readers primarily seek adventure stories, be it 19th-century novels or contemporary works. Although literature with commercial potential prevails, how do publishers guess which books would sell? Relying on public success in France is not enough. Generally speaking, it pays off to publish books based on historical events, social novels, crime stories or sci-fi. There are other genres too, though, including erotic novels by Apollinaire, Musset and Simenon, or The Little Prince for contemplative readers. From the long-term perspective, however, the highest selling author has consistently been Jules Verne.