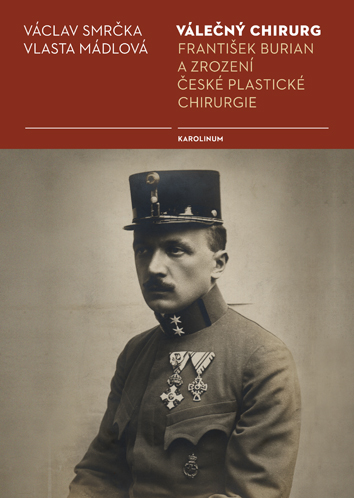 War Surgeon presents the professional beginnings of František Burian, the founder of post-traumatic plastic surgery. The book summarizes the period from 1912 through mid-1920s. František Burian experienced the Balkans Wars in 1912 and 1913 as a volunteer in the Serbian city of Belgrade and in Sofia in Bulgaria, where he treated soldiers’ wounds. Burian meticulously filled in medical reports and copied x-rays to be able to document individual wounds. This gave rise to a new discipline in Bulgaria – reconstructive plastic surgery – a discipline in which he had become interested during his study at the surgical clinic in Prague. His initial First World War engagement was in the Hungarian city of Timișoara as the head of the surgical ward of the military hospital.
As he remained in touch with his family through letters, a major part of the book’s text consists of Burian’s correspondence with his wife during both wars. In addition to personal information, we learn about specific wounds the soldiers suffered and their treatments as well as about the moral dilemma of a doctor in the middle of a war and about the emergence of a new medical discipline.