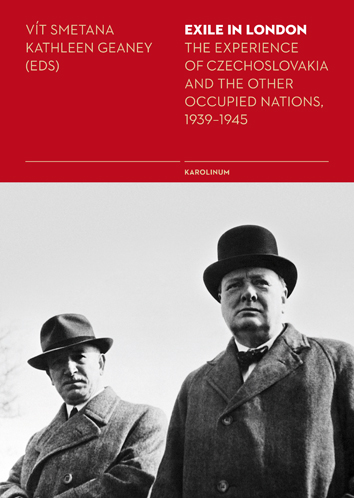 The Experience of Czechoslovakia and the Other Occupied Nations, 1939–1945

During World War II, London experienced not just the Blitz and the arrival of continental refugees, but also an influx of displaced foreign governments. Drawing together renowned historians from nine countries—the United Kingdom, Germany, the Netherlands, Belgium, Poland, Slovenia, the Czech Republic, and Slovakia—this book explores life in exile as experienced by the governments of Czechoslovakia and other occupied nations who found refuge in the British capital. Through new archival research and fresh historical interpretations, chapters delve into common characteristics
and differences in the origin and structure of the individual governments-in-exile in an attempt to explain how they dealt with pressing social and economic problems at home while abroad; how they were able to influence crucial allied diplomatic negotiations; the relative importance of armies, strategic
commodities, and equipment that particular governments-in-exile were able to offer to the Allied war effort; important wartime propaganda; and early preparations for addressing postwar
minority issues.

I. The Existence and Challenges Faced by the Exile Governments in London
Limited Influence: The British and the Governments-in-Exile of Poland, Czechoslovakia and Yugoslavia (Detlef Brandes)
Belgium in Exile: The Experience of the Second World War (Chantal Kesteloot)
A Cold Shower in International Reality: Redefining the Dutch International Position 1940-1945 (Albert E. Kersten)
Between Scylla and Charybdis: The Polish Government-in-Exile’s
Position with Its Allies and in Poland, 1940-1945 (Anita J. Prazmowska)
From Re-Emergence to Uncertainties: The Changing Position of Czechoslovakia in London throughout the Second World War (Vít Smetana)
The Factors Shaping the International Political Status and the Foreign Policy of the Czechoslovak Authorities in Exile, 1939-1945 (Radosław Paweł Żurawski vel Grajewski)
Polish and Czechoslovak Governments-in-Exile (and the Impact of Soviet Foreign Policy) in Russian Historiography (Victoria V. Vasilenko)

II. The Armed Forces of the Occupied Countries and their Political Significance
Together into Battle: The Armies in Exile: Considerable Value or "a Drop in the Ocean”? (Zdenko Maršálek)
The Yugoslav Armed Forces in Exile: From the Yugoslav Royal Guard Battalion to the Overseas Brigades (Blaž Torkar)
"The Most Difficult Country”: Some Practical Considerations on British Support for Clandestine Operations in Czechoslovakia during the Second World (War Mark Seaman)

III. The Preparation of the Post-War Solution of the Issue of Minorities Done in Exile
Was There an Alternative to the "Transfer” of German Minorities from Czechoslovakia and Poland during the 1939-1944 Discussions on Post-War Europe by the Governments-in-Exile? (Tan Kuklík - Tan Němeček)
Citizenship and Property Rights of "Our Germans:”
The Development between 1943 and 1945 of the Legal Status of Germans in Post-War Czechoslovakia (Matěj Spurný)
The Czechoslovak Government-in-Exile and the Legacy of Population Transfers: An Analysis of the English Language Discourse (Martin D. Brown)
The End of the International Protection of Minorities under the Auspices of the League of Nations (René Petras)

IV. Propaganda and Education in War-Time Britain
Bruce Lockhart, British Political Warfare and Occupied Europe (Richard Overy)
"Anything That Is Dear To Their Hearts”: Czechoslovak History and Culture in the London Broadcasts, 1939-1945 (Erica Harrison)
Walking on Egg-Shells: The Czechoslovak Exiles and Anti-Semitism in Occupied Europe during the Second World War (Jan Láníček)
Truth Conquers...: Political Pamphlets of the Czech and Slovak Opposition versus Edvard Beneš and the Czechoslovak Government-in-Exile (Dušan Segeš)
Looking for French, Anglophile or Soviet Inspiration? The Diplomatic Struggle for the Post-war Orientation of Czechoslovak Education and Culture (Doubravka Olšáková)