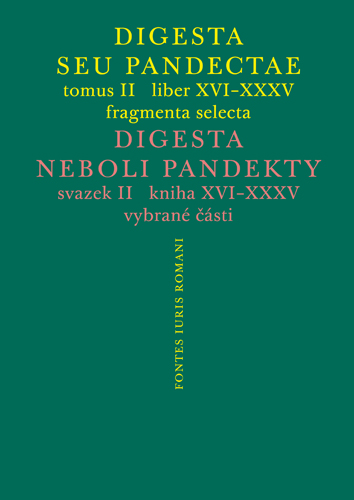 The third volume of the Fontes Iuris Rromani series, which presents translations of basic sources of Roman law into Czech, offers selected titles from the 16th to 35th books of the Digesta seu Pandectae issued by Emperor Justinian in 533 AD. Readers will primarily find passages covering the concept of contracts, such as contracts of deposit, mandate and incorporation. This is followed by the legal regulation of the purchase contract, liens, engagements and marriages, as well as “timeless” titles devoted to legal presumptions, ignorance of the law and deed, witnesses and use of evidence in Roman courts. It also presents the opinions of Roman lawyers on wardship and guardianship, regulation of alimentation responsibilities and also titles dealing with inheritance laws. This book, a critical edition as well as the first translation of Digest into Czech, contains the original text and is supplemented by extensive footnotes, and topical, name and location indexes.