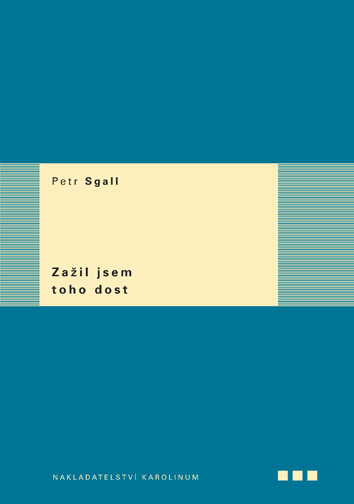 [I Have Experienced Quite Enough]

Professor PhDr. Petr Sgall, DrSc., is a widely respected scientist in the field of general, theoretical and computational linguistics and Czech studies. Although the "Sgall School" is often mentioned in Czech and foreign literature, very little is known about the scholar’s life. He appears to be a very introverted person, dedicated to science. This book thus presents a different view of his personality, presented by Sgall himself. Memories of his almost idyllic childhood closely related to the intellectual work of his erudite father are followed by traumatic experiences from the Second World War. This thin volume of Sgall’s memoires represents an exceptional record of, as he says in the introduction, his life at various, even terrible, times. It is a sincere testament to his coming to terms with these various periods of his life, being both their victim and participant. This testimony will undoubtedly find readers not only among those who know Petr Sgall in person, but also among others interested in the history from the 1930s on or in a personal background of the linguistic development of its leading representative.
Apart from the interview that Marie Jirásková conducted with Petr Sgall in 2009-2013 and which is accompanied by many documents and photographs, this volume contains two previously published essays, completing the personal experience with two aspects of interconnection of life stories and scientific views, as he had described them in the Prague Linguist Looking Back as well as in his interview with Eva Lehečková and Jan Chromý. Another included essay, Linguistics and the Murphy’s Law, prove that Petr Sgall is not a boring scientist, but a scholar who can take scientific research with humour.