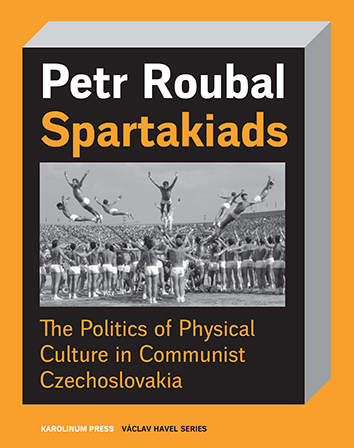 Every five years from 1955 to 1985, mass Czechoslovak gymnastic demonstrations and sporting parades called Spartakiads were held to mark the 1945 liberation of Czechoslovakia. Involving hundreds of thousands of male and female performers of all ages and held in the world’s largest stadium—a space built expressly for this purpose—the synchronized and unified movements of the Czech citizenry embodied, quite literally, the idealized Socialist people: a powerful yet pliant force directed by the regime.
This book explores the political, social, and aesthetic dimensions of these mass physical demonstrations, with a particular focus on their roots in the völkisch nationalism of the German Turner movement and the Czech Sokol gymnastic tradition. Featuring an abundance of photographs, Spartakiads takes a new approach to Communist history by opening a window onto the mentality and mundanity behind the Iron Curtain.

The book offers a comprehensive examination of perhaps the most important Communist mass ritual in socialist Czechoslovakia. Roubal weaves a fascinating narrative through the various chapters of the aims and the organization of these mass gymnastic events as well as society’s attitudes towards them in a highly readable account. […]
[R]oubal offers a captivating insight into the ritual politics of the Czechoslovak Communist regime that should be recommended reading to anyone interested in the mass events of not only in Communist Czechoslovakia, but also in other totalitarian states and the history of everyday life.
Andrea Talabér (European Review of History: Revue européenne d'histoire)