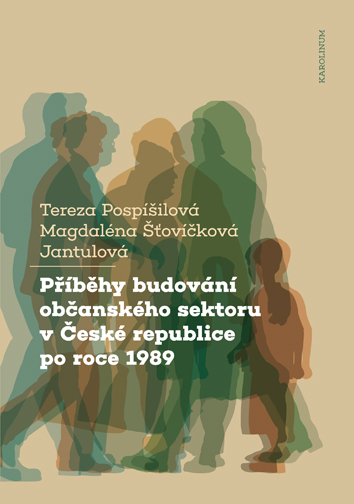 Stories of the Building of the Civic Sector in the Czech Republic after 1989 presents a new perspective on the formation of the civic sector in the Czech Republic during the 1990s, through narratives by personalities who took an active part. It is intended to reach experts in the fields of sociology, political science and history, as well as a wider readership, and thus contribute to recognition of this turbulent period, which was in many respects a turning point which influenced the current characteristics and problems of civic society.

The book presents the stories of eighteen personalities, which were involved in the birth of the new civic associations, such as the Partnership Foundation (Nadace Partnerství), the White Lifesaver (Bílý kruh bezpečí), or Barrier Account (Konto Bariéry). In the first part of the book, readers will find the context of current knowledge including key themes and definitions, data on the size and development of the civic sector and its historical, political and socio-cultural connections, which they can use while reading the narratives in the second part of the book.
The stories of the building of the civic sector help in the search for answers to questions such as these: Was the civic society really built "from scratch" starting in 1989? What were the visions of the participants, what problems did they face, and what did the idea of civic society mean to them?