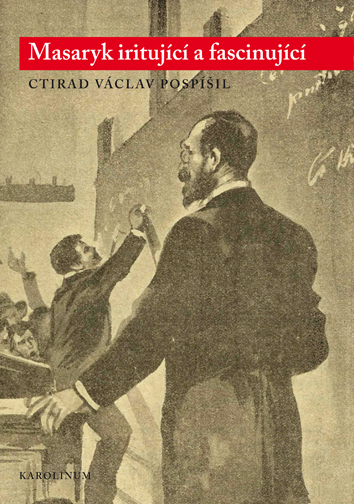 Masaryk Irritating and Fascinating is a vivid and engaging rendition of T. G. Masaryk’s life story as well as of the philosophical legacy of this president-liberator. The scholar approaches the past as the root of our present time, thus referring to the topicality of Masaryk’s legacy. Professor Pospíšil also analyzes and critically elaborates on the delicate theme of the religious dimension of the first president. His solution is innovative and at the same time surprising as he does not even attempt to hide his fascination by Masaryk, which however does not stop him from expressing his criticism and objections.
This book focusing on this unique figure of Czech modern history attempts to be appealing for a varied readership, including those who admire and respect Masaryk’s humanitarian ideals and his conception of democracy as well as Christians of all denominations in our country. It is published on the occasion of the 100th anniversary of the establishment of an independent republic of Czechs and Slovaks as without this event, Czech and Slovak Republics would not exist.