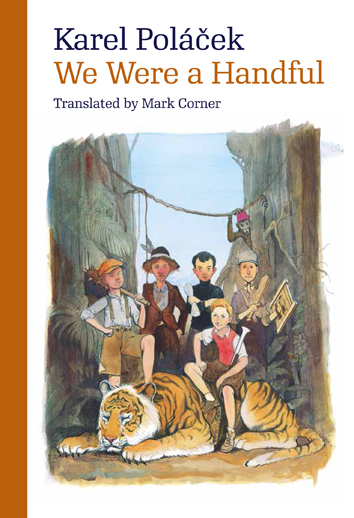 We Were a Handful (paperback)

The acclaimed novel We Were a Handful is the humorous story of five small-town boys. In 1943 during one of the lowest points of his life – as he awaited his deportation to Theresienstadt – Karel Poláček recalled his youth, inviting readers to see the world through the eyes of a child.
Written as a first-person narrative from one of the boys, the natural humor of the material is intensified by the language of the narrator as he attempts a grandiose tone to satirize and celebrate the people of his town. Poláček masterfully avoids the clichés of childhood naïveté as he weaves his tales of adventures, battles with the boys from a neighboring village, and first love – as well as the clash between the fantastic world of children and the prosaic world of adults. With We Were a Handful Karel Poláček beautifully portrays the world of a child from a Jewish family on the eve of tragedy.

„Conveys how humour can deal with tragedy… There is actually a lot of humanity in it.”
—David Vaughan, www.radio.cz