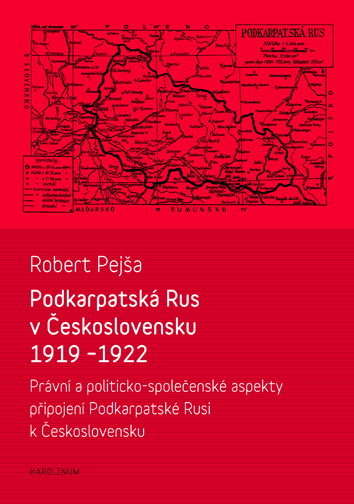 [Carpathian Ruthenia as part of Czechoslovakia between 1919-1922]

Carpathian Ruthenia represented a burning issue in the domestic and foreign policy of Czechoslovakia between 1919 and 1922. Carpathian Ruthenia’s affiliation to the CSR affected bilateral relations with neighboring countries, Hungary and Poland. Paradoxically, after annexing Carpathian Ruthenia, the new country faced a problem related to the fulfillment of its international commitment to provide Carpathian Ruthenia an autonomous status, which arose from two irreconcilable political and administrative concepts. On the one hand, we have the concept of a unified Czechoslovak political nation, which entailed a strictly centralist state, and, on the other hand, the internationally guaranteed concept of (territorial, political and cultural) Ruthenian autonomy, which involved political and administrative decentralization. Ruthenians demanded to be recognized as a specific national and political corporation within the country and openly called for active participation in the government of the territory from the very incorporation of Carpathian Ruthenia into the Czechoslovak state. Although Czechoslovak and Ruthenian politicians’ views of the government model for this territory differed radically from the very outset, they were not voiced publicly. These controversies however reflected the differing extents of the new country’s (and its political leaders’) identification with the newly acquired, but historically, politically and culturally foreign territory. The historical importance of this process for the representatives of the Ruthenians living in the country and outside its borders was mostly ignored by political leaders of the new Czechoslovak state. This ignorance, lack of interest and often also bureaucratic arrogance played an important role in the gradual chilling of relations between those who advocated the Czechoslovak solution of Carpathian Ruthenia’s future. This period between 1919–1922, while quite brief, in fact represents the peak of this effort from the perspective of asserting Carpathian Ruthenia’s autonomy, which has not since occurred again, even under democratic conditions.