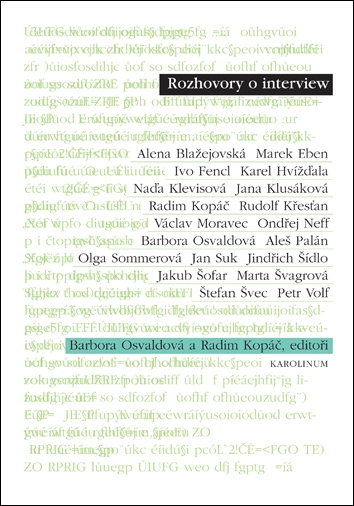 The book "Interviews about Interview" is a follow up to the books "On Feuilleton, through Feuilleton" (Karolinum Press, 2007) and "Experiments and Adventures: Notes on Essay" (Karolinum Press, 2008). The publication strives to provide different personalized views of the interview genre, from establishing its position, through an outline of its development to its contemporary place in the media including the Internet. The book's editors Barbora Osvaldová and Radim Kopáč invited interesting people to co-operate, among them Marek Eben, Ivo Fencl, Karel Hvížďala, Naďa Klevisová, Jana Klusáková, Rudolf Křesťan, Václav Moravec, Ondřej Neff, Olga Sommerová, Jindřich Šídlo, Marta Švagrová and Petr Volf. All contributed their experiences with interviews, either as those who were asking questions or answering them. The texts include information from daily journalistic work as well as practical advice for preparation of an interview in a book form.