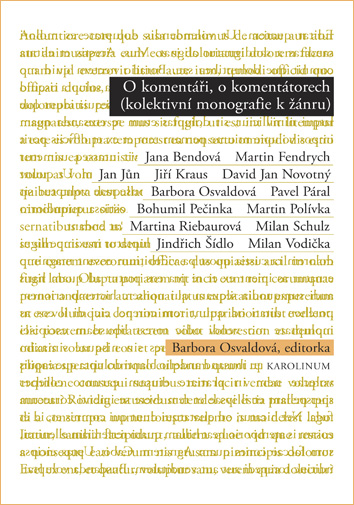 [On Commentary, on Commentators]

This collective monograph follows in the steps of other similar texts published by Karolinum Press (Osvaldová, B.– Kopáč, R. O fejetonu, s fejetonem (On feuilletons, with feuilletons), Osvaldová B. – Kopáč, R. Pokusy a dobrodružství (Experiments and adventures: notes on essay), Osvaldová, B. – Tejkalová, A. Internetizace a digitalizace žurnalistiky: Proměny a perspektivy žurnalistiky v epoše digitálních médií (Internatization and digitization of journalism: Transformations and prospects of journalism in the digital media era), Osvaldová, B. – Kopáč, R. – Tejkalová, and A. O reportáži, o reportérech (On reporters and news coverage)). We continue mapping out the Czech media scene believing that even the most scholarly theory cannot provide students of journalism or media studies with a sufficient insight into the problem without particular examples and experiences.
This text focuses on the genre of commentary. The preface and a brief introduction are followed by contributions by various figures, not only theoreticians of communication but also journalists with experience in the genre of commentary. The reader can thus get an idea of how a commentary is written and what are its main challenges. It is important for a commentator to prepare well, to be familiar with the topic, to be inventive in the composition as well as the point of view so that he or she can see familiar things in an unexpected and interesting way.
Another issue is the language of the commentary, which should not be boring, and a commentator must focus on the headline and first paragraphs as they are particularly important. The contributors point out that they often have to rewrite the first paragraph, searching for the most suitable words to attract the listener of reader.
Many of the contributors emphasize their own observations, experiences and field work, thus destroying the myth that a commentary can be written without talking to people or being present to various discussions, which is what a reporter does. However, a reporter should describe events, while a commentator searches for connections.