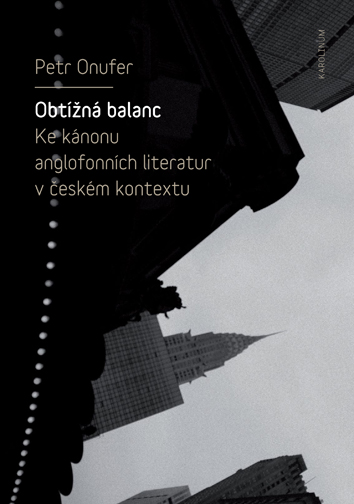 [Difficult balance: The canon of Anglophone literatures in the Czech context]

This book, written by English studies scholar and translator Petr Onufer, addresses the method of creating canons of Anglophone literatures in the Czech context. It is based on the concept of triune literature, in which the same rules apply to poetry, fiction and literary criticism: the latter is not considered a "service” genre, but as a distinctive literary type that deserves the same attention as "creative writing.” Onufer does not take a literary canon as being merely a goal to which thinking about literature should strive, but as a guideline, an auxiliary tool which encourages further study and keeps challenging and revising itself. The book’s sections focusing on general preconditions of canon, Anglophone literary criticism, American fiction and poetry in the Czech context demonstrate which features of the works included can be perceived as canonical and how these works end up in the canon and how they affect it. His own translation work serves as a corrective: he had the chance to become familiar with most of the English and American authors he writes about (e.g., Joseph Conrad, T. S. Eliot, William Faulkner, Jack Kerouac, Don DeLillo, Michael Chabon, Richard Wilbur, Leslie Fiedler and Terry Eagleton) as a translator. The knowledge about the construction of their texts he gathered are incorporated into his exposition, while linking them to the theoretical points of departure of his interpretation, in accordance with the practical orientation of the book itself as well as with the practical substance of the very literary canon.