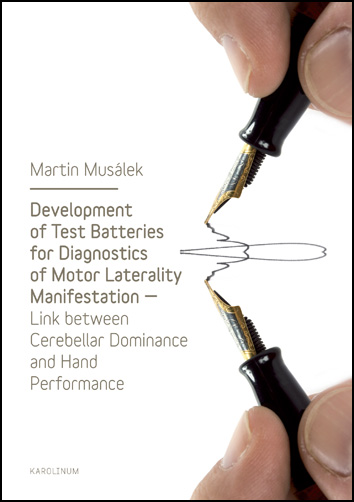 Development of Test Baterries for Diagnostics of Motor Laterality Manifestation

The aim of this book is focused on better understanding of laterality phenomenon and its evaluation. All informations are presented in sense to contribute to to the standardization of the new diagnostic tools assessing the motor manifestations of laterality in adolescence and adults aged 18–60 and children aged 8 to 10 years. Moreover in this monograph we try to suggest a new approach to assessing of motor laterality manifestation by means of relationship between cerebellar dominance and hand performance.

Acknowledgements Aim of this Book

4. Enviromental Factors as Possible Cause in Change of Laterality at Human
4.1 Birth Stress
4.2 Higher Level of Hormone Testosterone in Uterus

The manuscript provides a thorough and comprehensive review of the concept of lateralization across both living and non-living systems, in order to define the theoretical construct of „motor manifestation of laterality“. Mr. Musálek begins his manuscript describing the asymmetry seen at the level of the galaxy system, transitions to understanding asymmetry at the cellular and molecular level, and then moves to a detailed discussion of structural and functional brain organization with particular emphasis on motor control. The manuscript also reviews several of the most respected genetic theories and environmental accounts explaining lateralization of the brain and handedness.
The manuscript then begins to critically evaluate the body of previous literature on lateral preference and performance. Much of this discussion is focused on the assessment of preference, with less emphasis on varieties of performance measures that have been examined in past literature. Next, Mr. Musálek examines the diagnostic quality of the current measures of examining hand preference, including an in-depth analysis of the Edinburgh Handedness Inventory. Appropriately, the author discusses several shortcomings of the original work. This critical evaluation of the psychometric properties of the EHI is excellent, and allows Mr. Musálek to effectively argue that his careful and exacting methods of instrument development should result in a better diagnostic tool. The final portion of the literature review is spent suggesting a link between cerebellar dominance, hemispheric dominance, and ultimately the expression of hand preference and performance. A more in-depth description of the hypothesized relationship between cerebellar dominance and upper limb preferences would have been helpful, with specific emphasis on how cerebellar dominance is measured, and why hand performance measures alone may be related to cerebellar dominance.
The manuscript then poses the over-arching research questions, which is, in effect, to establish an improved diagnostic tool for assessing motoric expressions of laterality, more specifically handedness and footedness. A secondary question is to establish whether the measurement of cerebellar dominance is related to hand performance. Following directly from the overarching research questions, Mr. Musálek outlines 5 explicit hypotheses stemming from his review of literature. The hypotheses are exact, testable, and predict explicit theoretically driven findings.

Methodology
In creating the new diagnostic tool for the assessment of the motor manifestation of laterality, Mr. Musálek provides the reader with detailed information regarding the selection and refinement of the indicators of the theoretical concept being measured. A stringent process for assessing content validity was utilized, as well as a verification procedure for determining item clarity. Through this process, Mr. Musálek arrived at a reduced test battery to administer to children and adults, with modifications being made to the instructions for clarity purposes. A more detailed description of the explicit modifications performed would have been useful.
Further, highly detailed information is provided with respect to how sample size was determined and the final version of battery for both children and adults. No information is provided on why two versions were created for both samples, how cerebellar dominance would be assessed, nor how the performance measures would be quantified (i.e., errors, accuracy, time). Mr. Musálek provides an excellent chapter on the topic of structural equation modeling and, more specifically, confirmatory factor analysis, including a detailed discussion of the many assumptions underlying the technique and the methods that would be used to assess that the data met these assumptions. He coherently justified the use of structural equation modeling and confirmatory factor analysis, and undoubtedly comprehends the fine nuances of these intricate statistical methods.

Results
In the results chapter, Mr. Musálek provides the results of his model testing for each portion of the diagnostic battery. He offered solid statistical reasoning for the rejection or acceptance of each particular model, on both versions of the questionnaire, preference and performance aspects of the battery, for both children and adults. A summary was provided to detail the final models deemed appropriate for each aspect of the battery and a brief rational for the final items in the battery was included. Interestingly, the two versions of the battery resulted in the creation of slightly different models. These differences may not have been anticipated. A final summary table of the accepted models and the items contained within each portion of the battery would have been useful at the end of the results section.

Discussion and Conclusions
In the final pages of the manuscript, Mr. Musálek discusses the final structure of the battery for adults and children. Here, the author reiterates the logic of why a particular factor structure with particular items was selected. He provides some theoretical arguments to explain why some items were removed from the original battery, however, no direct comparison of the two batteries and the performance of children versus adults is provided. In addition, given the relative uniqueness of examining cerebellar dominance and its relation to lateral preference and performance, I would have liked to see an entire section devoted to this new assessment item given its relative significance within the models. This measure may prove to be highly useful to future researchers in the area of laterality in attempting to understand the organization of the brain for movement.

In conclusion, Mr. Musálek has not only conducted an ambitious study worthy of the doctoral distinction, but has displayed an impressive breadth and depth of knowledge within his manuscript.