[Why So Easily... Some Family Reasons for the Velvet Revolution]

The fourth edition of this sociological essay written in the history-making months of the years 1989 and 1990 is being published thirty-two years after its creation. It tells the story of how a despotic socialist state in the 1950s first appropriated the family, i.e., the private sphere of life, only to eventually see the family colonize the state. It takes us into the thinking of the critical time of its creation and brings an ever-valid explanation of the lowest-lying causes of the fall of the old regime, i.e., the private aspirations and forced strategies of very different groups of nameless social actors of the old regime, both those at the bottom and at the top, which eventually led to the point where there was no one left who was still interested in keeping it going.
In the extensive foreword to the second edition, “What we didn’t know ten years ago,” the author commented on further developments: “We slipped free from socialism so easily because capitalism was already prepared for us in it. It is so difficult for us to get into capitalism because ours was already prepared.” After the third edition in 2009, he then wrote a shorter foreword which relates to his text on the current situation regarding national heritage: “Do we know more twenty years later? Haven’t we also forgotten what we knew twenty years ago?” 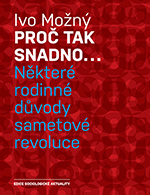