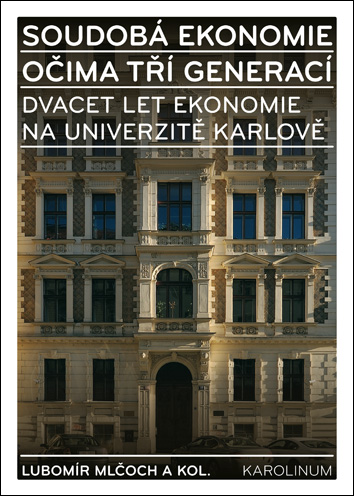 Contemporary Economics as Seen by Three Generations, written by leading academicians from the Institute of Economic Studies, presents papers from the Twenty Years After conference, organized on October 18, 2010, to commemorate the 20th anniversary of the Institute's foundation.
The collection of papers represents thematically varied texts: alongside texts on history and those looking back, it also contains papers focusing on the movements in new economics, not only those based on neoclassical microeconomic theory but also those devoted to the crisis in economics over the past few years as well. The collection was inspired by the search for sources and components of economics, which was built at the Institute of Economic Studies as well as by the practical experiences and research by the contributors.
This collection summarizes the open questions of interpretation of the sources of identity of economic theory and evaluates the two decades from the foundation of the Institute of Economic Studies at the Faculty of Social Sciences, Charles University, to the present and its international success, research focus and interdisciplinary character as well as its future course.

I would like to start my review with two general impressions which I had when I read the volume on the last 20+1 years of economic education at the Institute of Economic Studies (IES), Faculty of social sciences, Charles University. First, non-economists ask frequently whether economist can work without mathematics. In turn, economists like to answer that this kind of discussion would be more or less senseless for important topics. The presented conference volume, however, shows that leading economists can very well write nice texts dealing with general and important topics, which have the potential to address a wider audience.

Second, the volume collects contributions of three generations, but as Lubomír Mlčoch notes, these include the grandfathers, the seniors and the grandchildren. Surprisingly the generation of graduates from the early 1990s is missing in the academic institutions in the Czech Republic, which confirms my own experience. While it is reflects the new possibility in the business and commercial sector or abroad, but it also shows how difficult is to bridge any gaps in the education development.

The volume starts in historical and hierarchical order, with first contributions being prepared by the (presumably) oldest members of the conference, who participated also actively in the foundation and early management of the IES. Michal Mejstřík, Lubomír Mlčoch and Vladimír Benáček review the foundation of the IES from their perspective of the official representatives of the institution. In turn, Karel Kouba and Karel Půlpán witness the time period before the foundation of the IES. Thus these chapters belong to seldom descriptions of economic education before 1990. Moreover, Karel Půlpán and Vladimír Benáček discuss the background of personel developments during the foundation phase. They confirm that it is a difficult task to create a new institution.

The second part of the volume includes more general contributions which look at the past and current developments in economics. Lubomír Mlčoch starts with a discussion of economics as a social science. This contribution provides a synthesis of classical concepts with recent trends in economics and with philosophy. Jiří Hlaváček also leaves the narrow borders of textbook economics in his discussion of altruism, common goods and the role of the state.

Although the volume mentions three generations of economists in the Czech Republic, the reader who is not fully familiar with the Czech acadamia is not completely sure about who is associated with which generation. The contributions of the young generations are introduced by two chapters. Michal Bauer and Julie Chytilová devote their part to the discussion of behavioral economics.

Luděk Rychetník compares his experience from IES with his experience in the UK. By this, he writes about the communication between top economists from the British Academy and the British Queen, who represents views of British people. Here the economists explain the causes of the financial crisis and the implications for future development of this science. This is a nice story in a country with president who is economic professor and believes that it is necessary to correct the view of people and peers.

A more standard view on financial crisis is analyzed by Luděk Urban. Another topical contribution by Jan Ámos Víšek looks at the application of robust methods in econometrics. The volume is logically completed by the contribution of the current IES director, Martin Gregor. It underlines the importance of economic policy which has a long tradition at the economic studies in Prague.

Overall, the conference volume presents an interesting set of contributions on various aspects of economics theory, policy and education related to the Institute of Economic Studies. It includes interesting insider views on past developments, which are highly valuable for any reader with interest on economic education in the Czech Republic.