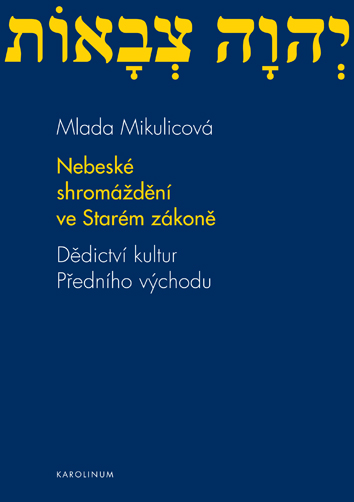 The book deals with the literary topic of heavenly assembly in the prophecies of Micah and Isaiah and in the books of Job and Daniel. This topic was adopted to the Old Testament from the cultural tradition of the ancient Near East as a foundation emphasizing the words of God's judgment (I saw the Lord sitting upon a throne, and all the host of heaven standing by Him on His right and on His left...). Detailed descriptions of a sovereign god on a throne surrounded by "his faithful" have been documented in mythological fragments of Ugarit Ba'al tales, Mesopotamian epics Enuma Elish, Etana, Nergal and Ereshkigal and mainly in the combined visual and textual rituals of Egyptian necropoles. In the new context, the ancient mytheme forms an image of God's judgment, during which the historical actor hears God's judgment of the role entrusted to him from the viewpoint of God's timeless design. In Isaiah's prophecies, the people of God, Israel, is being judged, while in Job's dialogues it is philosophising, defiant man being judged. The static scene of God's judgement, presented as a memento of earthly events, which are represented out of time and space, yet at the same time forming the fate of both the individual and of human history, remains excluded from the dialogue. This book by philologist and religious historian Milada Mikulicová interprets the Assembly of God in the context of the Old Testament prophecies as a timeless reflection of eternity whose view is focused on the scene of history.