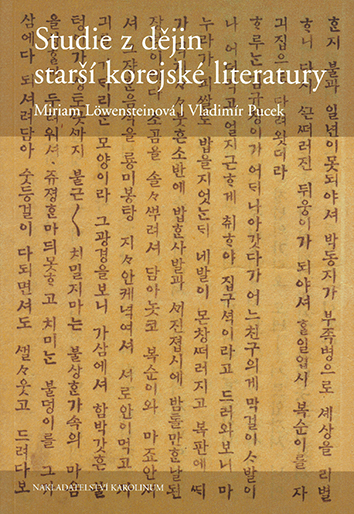 [Essays on the History of Older Korean Literature]

This publication - the first of its kind in the Czech Republic with such a scope - by Miriam Löwensteinová and Vladimír Pucka, Korean scholars from the Institute of Far East of the Faculty of Arts, Charles University, captures the main stages of the development of classical Korean literature from the origins through the beginning of the 20th century. In 13 chapters, the authors follow the development of Korean fiction, from the myths of the founding of the ancient Korean kingdoms and old chronicle historic stories to the classical Korean novel (kodae sosol) of the 17th - 19th centuries. They also address the development of poetry, especially the so-called homeland songs (hyangga), classical three-line poetry called sijo and epic poems called gasa. The history of Korean writing is explained in close connection with the thought and religious movements (Shamanism, Buddhism, Confucianism, etc.) as well as with influences by the literatures of the neighbouring countries, in particular Chinese. The last chapter focuses on the so-called new fiction (sin sosol) within the context of the enlightenment and reform movements and the influence of the western ideas at the turn of the 19th and 20th centuries. These works are already considered a bridge to the rise of modern Korean literature.
The book is supplemented by bibliography of translations and essays on Korean writing published in Czech. The intended audience is Korean studies' students, those interested in the literary scene of the Far East, but also wider audience. At the time of broadening relations with Korea, this publication enables to get acquainted with this country's valuable literary heritage and thus to better understand the original traits of Korean culture.