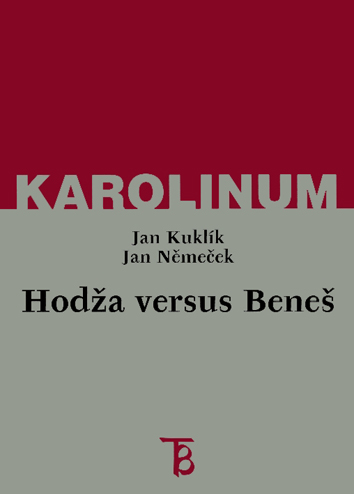 Kuklík, Jan ? Němeček, Jan: Hodža versus Beneš. Milan Hodža a slovenská otázka v zahraničním odboji za druhé světové války (Hodža versus Beneš. Milan Hodža and the Slovak Question in the Foreign Resistance Movement during World War II)
This book, written by young promising Czech historians, is an account of the relationship of two prominent politicians of Czechoslovak history in the period of foreign resistance during World War II. The authors studied original archive documents in Czech as well as foreign archives to acquire a deep insight into the problem. The book is accompanied by the correspondence between Milan Hodža and Eduard Beneš within 1939 and 1944. This study gives a new view not only of the problem of the so called ?Slovak question?, but also of the last periods of the ?First Czechoslovak Republic?. This readable and eloquent monograph will be appreciated by scholars as well as by students and by the wider public interested in the period of World War II.