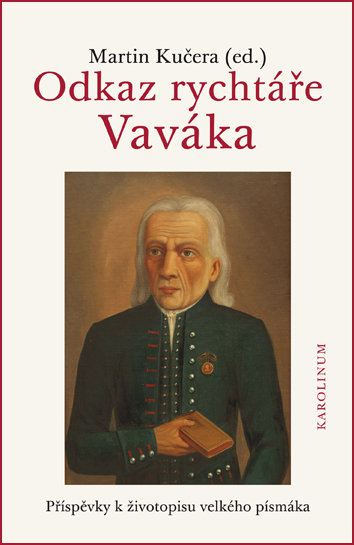 [The Legacy of Reeve Vavák]

The reeve from Milčice in the Poděbrady district, František Jan Vavák (1741–1816), was one of the most important rural popular scripturists, peculiar authors from the rural environment, who preserved the vernacular language for future generations during the period of the National Revival. Vavák is one of revivalists of the "first generation,” which is primarily associated with its most prominent representative, Josef Dobrovský, and which was formed around Kramerius’ Czech Expedition publishing house. This book aims to commemorate his spiritual legacy and his stature. The opening section contains the edition of Vavák’s unfinished Biography prepared by Stanislava Jonášová in the 1970s. The second part of the book presents a selection of Vavák’s Memoires, which were published in books in 1907–2009. The thirds part of the book included a selection of Vavák’s poetry and songs, which have not been published in a book form. The book closes with František Kutnar’s study on the literature written by rural popular scripturists and chroniclers, which was only published once in a samizdat festschrift on historian Zdeněk Kalista’s 80th birthday. This publication was prepared by the editor of the last volume of Vavák’s Memoires (published in 2009 by Karolinum Press), Martin Kučera.