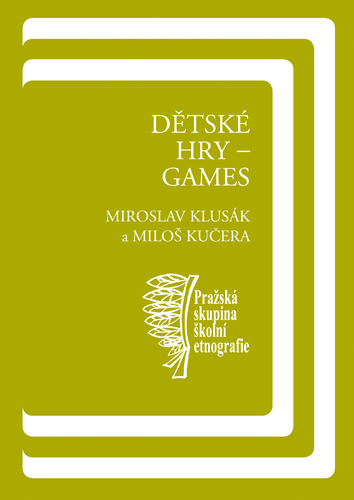 The scholars from the Prague Group of School Ethnography pursue the notion of game, children's game and children's group games, based on a collection of 1600 recordings from grades 1 to 9 of elementary and middle school. Twenty years after the publication of Miloš Zapletal's monumental "Great Encyclopaedia of Games for Children, Youth and Their Teachers" a collection of "traditional, folklore games," which school children played in 1995-2000, has been published. These games are sorted according to types of games into chases, catching games, hide-and-seek games, hunting games, races, fights, endurance games, riddles and many others. Another criterion for the classification of games presented in the book is more general: touching, throwing an object, running, composition of movement, composing an object, guessing, fictitious identities and stories and others. At the end, the scholars discuss the possibility of the future combination of the poetics of instinct (oral, anal and staring) with relations (Oedipal and its derivations, as a competition, "bullying," various democratic distributions) in the game classification. The book contains a CD with indexes allowing for full-text searching of the games in the collection, available on the Internet.