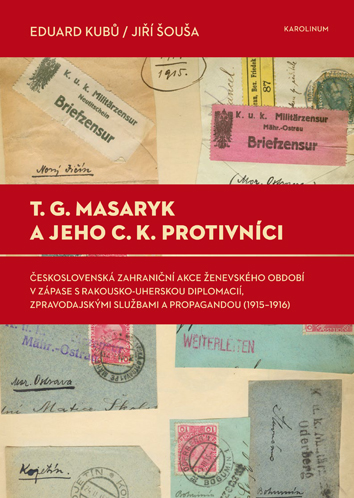 [T. G. Masaryk and his imperial opponents. Czechoslovak foreign action in the Geneva period in a clash with Austro-Hungarian diplomacy, intelligence and propaganda (1915–1916)]

Masaryk’s foreign action which began in Switzerland is not merely evidence of the great diplomatic and organizational work and skills of a few intellectuals endowed with a considerable amount of foresight and understanding of the world military conflict, but also a truly thrilling, complicated collection of stories. The primary visible political story, which legitimized the formation of the independent Czech/Czechoslovak state in the international context, was accompanied by other less striking stories, without which Masaryk could not have succeeded. The great confrontation game of the foreign resistance movement with Austro-Hungarian bureaucracy included compatriot associations and foreign emigrants in general, intelligence services, police, censorship, propaganda, the judiciary as well as individuals – politicians, journalists and, last but not least, also the nameless patriots who risked their personal safety as messengers or members of the home resistance movement who maintained contacts with foreign countries, and finally those who put their lives at stake in the front lines as foreign legion soldiers. The scholars juxtapose stories of Austrian or Austro-Hungarian professionalism with those of people who had to master the diplomatic, intelligence and political trade on the go, during the clash.
This book has been published on the occasion of the 100th anniversary of Masaryk’s speech in Geneva’s Reformation Hall on July 6, 1915.