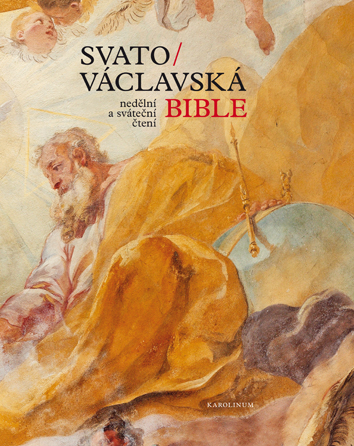 "The Czech Bible, That is the Holy Scriptures Based on the Used Ancient and General Latin Translation Endorsed by the General Holy Roman Church", known as the "Wenceslas Bible" has been eclipsed by the best known Biblical translation, the Brethren Kralice Bible. Nevertheless, the Wenceslas Bible is one of the most significant monuments of the Czech language and baroque literature and its influence, religious, cultural and linguistic, can be seen up to the 19th century.
The translation, or better yet adaptation of older Czech translations, adjusted to the Latin text approved by the Council of Trent (Vulgata Sixto-Clementina) as closely as possible, was initiated by Bishop Matouš Ferdinand Sobek of Bílenberk. The work on it, carried out by Jesuits Jiří Konstanc, Matěj Štajer and in cooperation with several others, commenced in the 1670s and was published in three volumes between 1677–1715. The Catholic clergy thus gained an authorized, church-approved text in Czech that could be used both in liturgy and in pastoral work.
This anthology aims to spread and deepen the knowledge about the Wenceslas Bible for all who are interested in this theme. The selection and organization of the texts follows liturgy as reading prescribed pericopes during service was a method of presenting the text of the Scriptures to the believers, which consequently led to the translation’s effect on popular culture. It includes pericopes that were read on Sundays and religious holidays as well as a selection of commentaries on the Biblical text and rich illustrations.