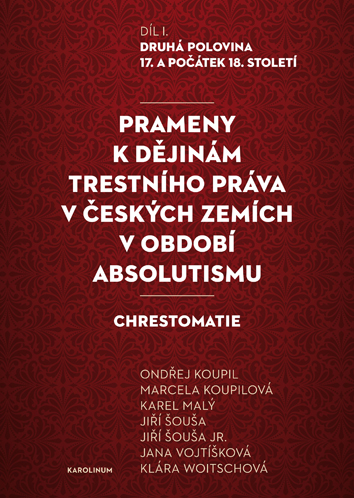 [Sources to the history of criminal law in the Czech Lands during absolutism. Volume 1]

This book presents sources to criminal law in the Czech Lands in the 17th and first half of the 18th centuries. It aims to uncover the roots of the legal culture which served as the basis of modern criminal law at the end of the 18th and in the 19th centuries which was in effect in the Czech Lands to historians, lawyers as well as broader readership. Absolutist codes begin to depart from the sacral perception of crime and punishment and to strongly assert state interest, be it viewed as the will of the ruler or the absolutist state as a whole. Without understanding this intermediary stage between the Estates and modern period, we cannot understand the logic of the evolution of criminal law conceptions and the development that occurred primarily during the period influenced by ideas of the enlightenment.