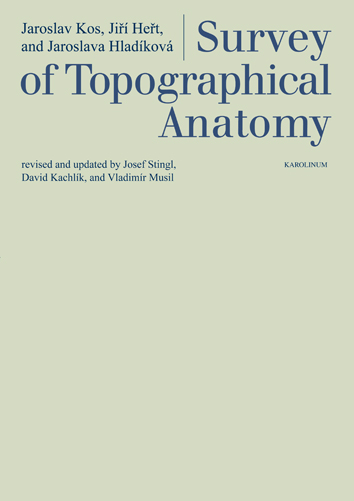 The original text was published in 1964 by the anatomists Jaroslav Kos, Jiří Heřt and Jaroslava Hladíková from the Medical Faculty at Charles University in Pilsen. This publication was important in that it represented the first Czech post-war textbook on topographical anatomy based on Weigner’s teachings. The first edition was an overwhelming success among medical students and physicians alike, as the topography of the entire body was described in a brief and understandable manner.

The popularity of the text was echoed by its repeated republications and such was the demand that each subsequent edition was out of print within a short period of time, with the last edition being published over 20 years ago. The authors are of the opinion that this publication remains a valid and useful contribution to topographical anatomy and have as such decided to re-edit and republish a more modern form of the original text. This new and ‘revitalised’ edition contains the updated English and Latin Terminology (Terminologia Anatomica, Thieme, Stuttgart, New York, 1998), digitally enhanced diagrams and figures; and some minor changes to the original text.