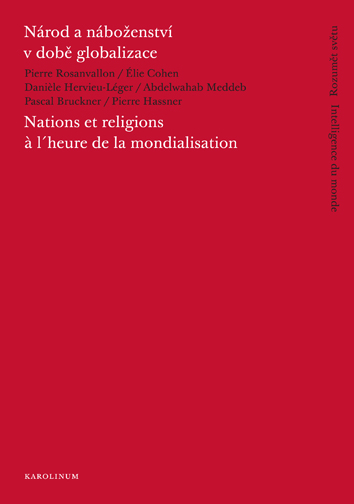 [Nation and Religion in the Globalization Period]

Národ a náboženství v době globalizace / Nations et religions a l´heure de la mondialisation
This publication in two languages (Czech and French) contains the lectures, which were held in the French Institute in Prague in 2007 as part of the cycle entitled "Understanding the World". This lecture cycle was to present the main trends in French public debate in the Czech Republic, which in 2007 focused on the problem of the future of a nation and religion. Are we witnessing a disappearance, lasting or rebirth of these traditional frameworks of our collective lives? This question of central importance to our societies was approached by several prominent personalities of the French intellectual life: Pierre Rosanvallon, Élie Cohen, Daniele Hervieu-Léger, Abdelwahab Meddeb, Pascal Bruckner and Pierre Hassner. Lectures, prefaced by Mr. Jean-Marc Berthon, French culture attaché to the Czech Republic and with an epilogue by professor Jan Sokol, have been published in French and their Czech translations.