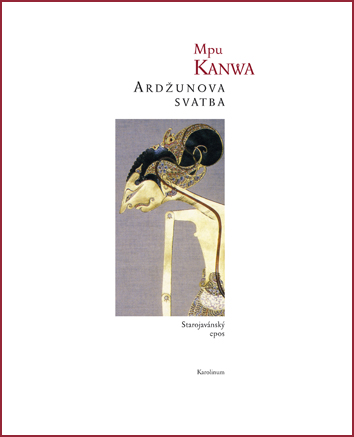 [The Marriage of Arjuna ]

This ancient Javanese epic from the first half of the 11th century BCE was written by poet Mpu Kanwa, who was at the service of the Javanese King Erlang. Mpu’s protagonist, Arjuna, is based on the character of the same name from the Indian epic Mahabharata, in which he exhibits great bravery and skill in the martial arts. On the other hand, the Javanese version focuses on his internal mental strength, which helps him defeat even the strongest enemies in the name of justice. In addition, Arjuna Kanwou is introduced as an irresistible seducer of women. The epic contains 36 songs; the verses in cantos have the same number of syllables and the same distribution of long and short syllables. Zorica Dubovská translated the work, and Petr Komers added the poetic qualities. The book contains definitions of terms and names. This is the first translation into Czech. Graphic design by Jiří Voves.