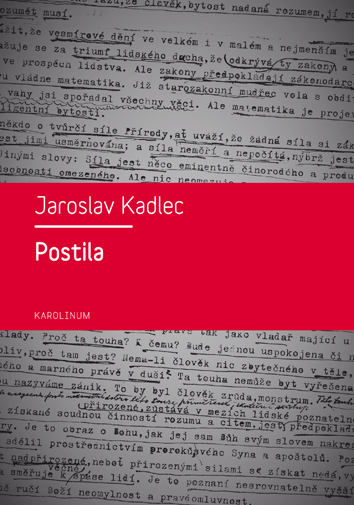 Jaroslav Kadlec, a professor of church history at Charles University in Prague (born 1911), experienced in his personal life all of the changes in the world of the Czech twentieth century. His promising scientific beginnings were ended by the war, and after obtaining his second doctorate, his university career was ended by the onset of the communist era. He experienced imprisonment and years of manual labour; the year 1968 saw his return to the university faculty, only to be later ousted by the normalization period. He then took on two parishes in the Bohemian-Moravian Highlands and systematically worked there - and from 1990 on in parallel with work at the university - up through 2002.
In the seventies and eighties, the pulpit came to be his faculty. He lived with his parishes to the fullest, in truth he "taught" here, in words, by example, by his understanding and loving relationship towards people and by his bravery. Over the years he carefully thought out his sermons and preached in cycles ranging from the basics of systematic religious education to gentle and relaxed reactions to the problems of the time and needs of people to orient themselves in them, react to them honourably and morally come to terms with them. His imaginary helping hand over time made its mark on more and more people.
The written documentation which he used to prepare his sermons gradually came to be his Postil. Its challenging yet accessible content can still speak to the readers today, enriching them and leading them to contemplation. It is evidence of the continuity of the activity of the church in the Czech lands and of the positive values this continuity represented. It is also however a highly unique testimony of the times during which his sermons were written and to which they reacted. Witness to the brave, silent resistance to the ruling evil, not damning its bearer. It is also testament to the diversity of what is called the "grey zone": brave and wise people consciously belonged to it, people who could preserve and defend basic human values and pass them on to further generations as living and desired. The publishing of Kadlec' Postil is in this sense an edition of a specific source, which captures the diversity and history of the recent times. It is being released on the 100th anniversary of the author's birth.